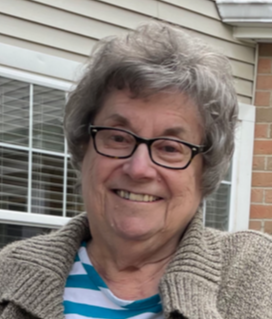 Copy the text below and then paste that into your favorite email application.

Hand delivered by a local florist

Our Lady of Mt. Carmel Church

Mary Lou (nee Bongirolami) Krizner, age 84, wife, mother, grandmother and aunt, passed away
peacefully on November 10, 2022.
Born on September 6, 1938, Mary Lou grew up in the Kinsman Road neighborhood on the
Southeast side of Cleveland. She attended Saint Cecilia Catholic Church and Elementary School.
As the youngest of six sisters (two of whom were each married before she was 6 years old),
Mary Lou spent much of her youth with nieces and nephews who were close in age to her. It
was in this environment that she learned the meaning of family – a lesson she brought with her
when she began raising her own family.
She graduated from Hoban Dominican High School in 1956. Shortly thereafter, Mary Lou and
her family moved to South Euclid.
It was during this time period that Mary Lou began working for Luria Brothers where, in 1960,
she met Ron Krizner. They began dating and soon fell in love.
Mary Lou and Ron became engaged at Christmastime 1960 and were married on August 5,
1961, at Saint Margaret Mary Church in South Euclid.
After living on Svec  Avenue in Cleveland after they were first married, Mary Lou and Ron moved
to Wickliffe in October 1962 where they raised their children, Ken, Karen and Paul.
The house in Wickliffe became the center of many family gatherings, most notably Christmas
dinner when our extended family would come and celebrate.
After 27 years in Wickliffe, Mary Lou and Ron moved to Brentwood, Tennessee. Although it was
just the two of them, they built a house with guests in mind. Mary Lou and Ron were always
ready to welcome family and friends. They also built lasting friendships during their 20 years in
Brentwood.
In 2009, Mary Lou and Ron moved back to Northeast Ohio and lived in Willoughby, again
welcoming all guests into their house.
Mary Lou was an avid reader. Among her favorite authors were Clive Cussler and Debbie
Macomber. She played tennis and volleyball with other mothers in the neighborhood. And she
was an amazing cook, with many specialties including chicken paprikash, spaghetti, stuffed
cabbage and pizzelles.
Mary Lou is survived by her children Ken (Tricia), Karen Young (Michael) and Paul (Charlene);
grandchildren Jason Young, Steven Young, Alexis Krizner, Emily Krizner and Evan Krizner;
numerous nieces and nephews; and sister-in-law Marianne Krizner.

The family wishes to thank the staffs of Hospice of the Western Reserve and Brookdale Senior
Living (Wickliffe) for their tender care of mom in her final days.

To order memorial trees or send flowers to the family in memory of Mary Lou Krizner, please visit our flower store.

Our Lady of Mt. Carmel Church

Family and Friends will meet at Church